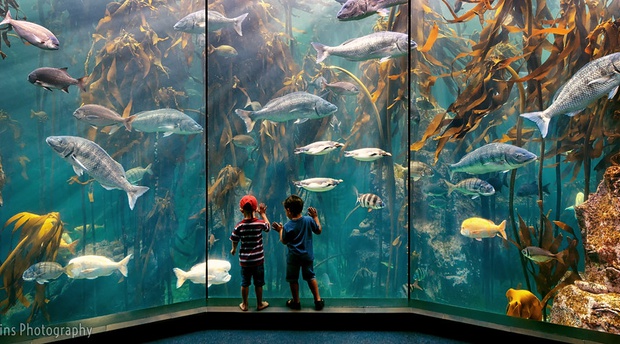 The Two Oceans Aquarium is located at the Victoria & Alfred Waterfront in Cape Town, Western Cape, South Africa. The aquarium was opened on the 13 November 1995 and comprises several exhibition galleries with large viewing windows. The aquarium is named for its location, where the Indian and Atlantic Ocean meet. The Two Oceans Aquarium is a window into the spectacular oceans surrounding the southern African coast. Through displays ranging from the small and almost fantastical Knysna seahorses, to sea turtles and shoals of shimmering fish, the aquarium holds wondrous discoveries around every corner. Come face-to-face with giant spider crabs and have an adventurous tactile experience at the Touch Pool. Be sure to visit the I&J Ocean Exhibit, with its 9m long window, and 10m long full tunnel. Qualified divers can also make use of the opportunity to dive in this exhibit with shoals of fish and turtles. The Jelly gallery is sure to mesmerize and enthrall. The Two Oceans Aquarium is open from 09h30 – 18h00 daily. Tickets are R185 per person.  Baywatch House can take you there during your stay in Cape Town.

Predator Exhibit - This exhibit holds 2 million litres of seawater. Ragged-tooth sharks as well as various other fishes are found in the exhibit.

I&J Ocean Exhibit - This exhibit holds 1.6 million litres of seawater. Various fishes, rays and turtles to be seen in this exhibit.

Kelp Forest Exhibit - One of the aquarium’s biggest attractions, this underwater forest is home to shoals of coastal fishes, such as white mussel crackers, steenbras and spotted gully sharks, and living specimens of South Africa's kelp species, sea bamboo, split-fan kelp and bladder kelp. The northern rock hopper penguins also use this exhibit for their exercise.